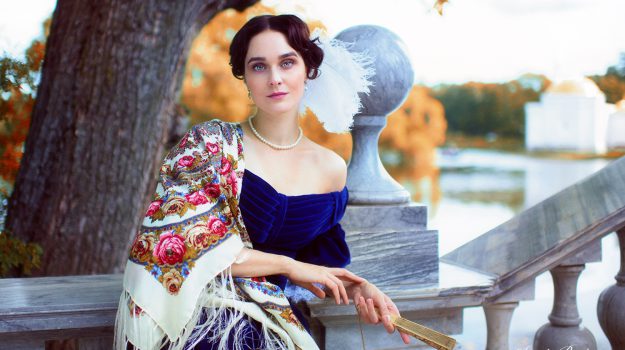 A long dreamed dream of mine, became reality last September. The dream to travel to Russia and St Petersburg. I grew up in the eastern part of Germany and during my childhood in the cold world war russian people and their culture were always representive. In every major city you were able to find russian barracks, buildings and also shops. My grandfather travelled several times to Russia and always told us children about his experiences and brought Matroschkas for us as souvenirs from his travels. How often I played with them, when I was younger.
Finally it was time for me, not only listen any longer to the people talking about Russia – I was able to travel by myself. And my very first day in St Petersburg was more than I have ever expected in my dreams! Lucky me, I have found a russian model called Pani on Instagram with a contact to a designer with a huge fundus of historical gowns. It was hard to decide for only one gown. In the end I wanted to tell a story about a czars daughter. Inspiration of our photoshooting was Grand Duchess Maria Nikolaevna of Russia, eldest daughter of emperor Nicholas I.
And Pani nearly looks the same. What a surprise as she picked me up in the morning of my first day in the hotel. We drove outside St Petersburg to Puschkin to Catherines Palace. A lot of tourists were waiting at the entrance. But again, lucky me – Pani is working as a tourguide and knows all the secret entrances and places. So we were able to made the photos in front of such stunning and historical buildings and park sceneries.
And I was a lucky one for the 3rd time – because the wheather was warm and sunny. As I learned it’s often raining in St Petersburg.

So now please have a look at the gallery.
Yours truly, Annie Bertram